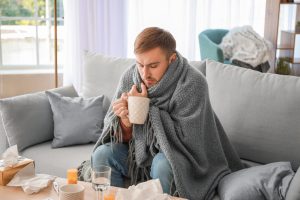 Isn’t it time you stop chasing symptoms? These signals that you get from your body are frequently misunderstood. More importantly, treating symptoms without getting to the cause of a problem can lead to mismanagement of your health. It can also lead to more severe health problems down the road.

Let the Body Do Its Job

When you get sick, for example, and your temperature goes up, your body is naturally fighting off the infection. Bacteria thrive in a climate that is 98.6 degrees so your body’s Innate Intelligence raises your temperature to help fight off the infection on its own. The symptoms of this elevated temperature can be muscle aches, fatigue, weakness, and general malaise. At the first sign or symptom of a fever, many people will immediately panic. They try to bring the temperature down with medication. What they are doing is treating the symptoms rather than letting the body do its job and heal itself.

The medications that are used to treat these symptoms can lead to side effects and even weaken the body’s natural immunity. In recent years, the overuse of antibiotics has created an epidemic of superbugs. These superbugs create individuals that are untreatable and pose a serious threat to our long-term health. The CDC states, “If antibiotics are used too often for things they can’t treat—like colds or other viral infections—they can stop working effectively.” Antibiotic resistance has been a concern for years and is considered one of the world’s most critical public health threats. Widespread overuse and inappropriate use of antibiotics is fueling an increase in antibiotic-resistant bacteria.

In the U.S., antibiotic-resistant infections are costly. They are responsible for $20 billion in excess healthcare costs, $35 billion in societal costs, and $8 million in additional hospital days.”(1)

Many experts say that it is better to give the body a chance to heal itself. It can heal with rest and fluids along with chiropractic adjustments that remove pressure from the nervous system. Unless there is an extreme elevation in body temperature, and depending on other symptoms, allowing your body to heal itself naturally helps your immune system build the resistance it needs to keep you healthy and fight infections more effectively.

Since nerves control every cell, tissue, and organ of your body, problems in the nervous system can cause or mimic nearly any and every symptom imaginable. Consider the case for “referred pain.” This means you can feel a symptom in one part of your body while the cause or the origin of that pain is somewhere else. For example, very often the cause of arm, hand or finger pain is in the neck. Leg and foot pain will often originate from a problem in the back. Problems with the gallbladder will often refer pain to the spinal nerve roots in the middle part of the spine and vice versa. Chiropractic works to restore health and vitality to the nervous system. Through chiropractic care the entire body often becomes free of symptoms.

Stop chasing symptoms – they can hide the real cause!