Be The Change, Change The Being 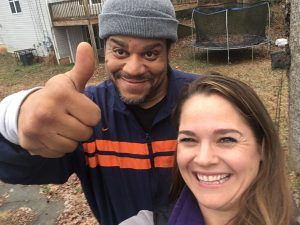 Change can happen, even when you aren’t looking for it. In the late summer of 2017, I began to take notice of several people who seemed to be a family hanging out at the exit that I bypassed to and from work daily. It’s very common to see people at this particular corner asking for a handout, and I shy away from making eye contact, acting distracted, so that I don’t have to feel bad telling them no, again. One day, Dad was with two boys selling water out of a cooler. The next day, Mom and two different boys were sitting in the dirt, playing with sticks. A week later, the four of them were walking up the sidewalk across the street holding hands. I didn’t understand what was going on, but it had definitely captured my interest. As I pulled out from the exit and made my turn for home on this Tuesday evening, my innate awareness led me to do something I’d never done before. I got home, looked at my partner, and asked him to please stop what he was doing and get in the car with me. 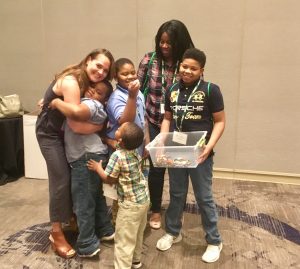 And so it began…

As we approached the exit, the mom and two older boys, both with outstretched hands to shake, started walking toward me. I introduced myself and asked the mom if she would share with me what was happening and if there was anything I could do to help. “We need a home,” she said.  With a big sigh, I replied that I was probably not the person to ask for a home, but I thought I could help with other things. I found out that they only had what they could carry with them.  Mom, Dad, and four boys from the ages 2-11 years old would check out of a very slummy hotel at 11am and take the bus up to one of the exits around here and do their best to get enough food, money, and water to be able to check back into the hotel that evening so that they could fall asleep with a roof over their head.

As a teacher and chiropractor at Café of Life in Grant Park, I was keenly aware that this family wasn’t thriving, they were surviving.  When a person is in survival mode, whether it be from homelessness, loss of a loved one, increased chronic stress or trauma, the sympathetic part of our nervous system can become overwhelmed and weakened. This stress can further decrease one’s overall health and happiness, affecting every function of the entire body. I knew that in order to change the outcome of their life, I had to help them get some core needs met. 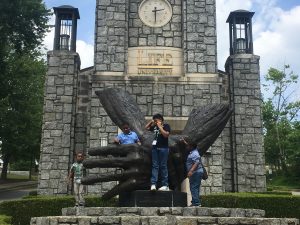 I immediately went to the nearest shopping center and purchased two roller suitcases and four backpacks, one for each person to be able to carry, and filled them up with toiletries and food. Quickly, I threw up a post on my Facebook page, including my neighborhood page, Kirkwood Neighbors, letting them know that I had stopped for this family and I would be going back in two days to meet them. If anyone wanted to offer anything, I offered for them to drop it off at the Café of Life.

In 48 hours, I had THREE TRUCK LOADS of food, eatery, cleaning supplies, toiletries, clothes, toys, money, etc. I was delightfully surprised at the thoughtful response and packed up my truck to make the first delivery.

As promised, the family was waiting for me.  When I opened the trunk, Mom began to cry and shake. She was going through each of the items in the truck and calling the boys over to get them to help carry everything.  I reassured her that there was plenty more and I would come back each day with deliveries. Her appreciation was enough to let me know that this had indeed been the reason that I listened to my innate that day.

The outpouring from the local neighborhoods including Kirkwood, Oakhurst, Decatur, and Grant Park, friends from Coweta County and the Trinity Anglican Mission Church, two of Atlanta’s government officials, Valencia Hudson and Natalyn Archibong, as well as the participants of Café of Life Chiropractic Center were so generous in their giving.  I was able to compile a notebook with names of helpful people. An Uber Driver who was willing to donate his time and drive the family around. Owners of shelters in the area. And names and addresses of local food banks. Business owners asked what the parent’s skills were and offered them work opportunities. On what I thought was our last meet-up, I handed the family this notebook, calling it their lifeline. I told them that all the connections inside of it would get them back on track.  I gave them my number and some cash and asked them to be in touch. 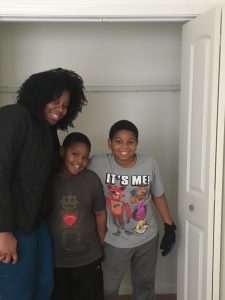 If only it were that easy.

By this time, it was early October and it was getting cold.  The shelters were all full. And as I had to learn, there was only one who would accept an entire family. It was also full.  The family was not willing to be separated. So, they quietly continued their daily struggle.  When I learned of this, I was devastated. An angel had stepped in to help me through this, a woman who works with underprivileged children and runs her own non-profit.  I often reached out to her for guidance.  She explained that they needed to have a roof over their heads in order to start thinking about anything other than surviving the day.

So, that evening, I set up a YouCaring Account and reached back out to the community.  My ask was for 60 people to donate $35 for a total of $2100.00 so that the family could stay in their hotel for one entire month.  That morning I woke up and screamed in delight.  The fund was already at $1700 and growing by the second. 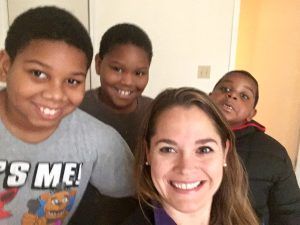 At this point, I started to consider being smarter with how the money was spent. I began calling Airbnb’s, apartments, home rentals – all to no avail.  The rigid procedures of these establishments required background checks and proof of income from both Mom and Dad. Calls went out to friends and the search began.  The next few months brought strenuous ups and downs. The family was moved into a hotel that was able to be paid for weekly. But with no home options on the horizon, our budget was draining, and the family was losing trust in me.

Finally, on December 23rd, we got our break.  Another neighbor had also begun to collect funds and was also calling around to find housing.  It was the day before Christmas Eve. With so many people’s hands and hearts combined, we moved these six beautiful people into a three-bedroom duplex. Six months’ rent was paid for upfront, and the other six months available to them.  I picked up a girlfriend’s box truck and drove around picking up furniture from the community. Soon the house was completely furnished. There was a proper bed for each person, curtains, carpets, cleaning supplies, kitchen supplies, groceries, toys, and clothes.  They even had a secret Santa wish list fulfilled to put up by their tree on Christmas morning. It was an unforgettable day. 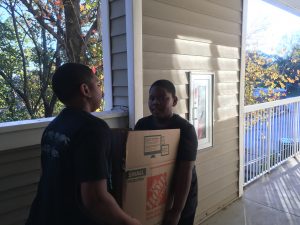 A few months passed since the family had moved into their home. I was able to connect with the mother a little more intimately.  She shared with me that she was only 32 years old.  At three, her mom was murdered. She and her sister were passed around through foster families who didn’t care about them.  She learned to lie to her social worker, who she didn’t consider to be helping her or believing her cries for help.  When she and her sister were old enough to be on their own, she watched every woman she knew in the similar situation turn to drugs and prostitution.  She knew that she had to have a “plan A, B, C, D, and E” or she would end up the same way.

As young teens, her sister met someone and moved to Atlanta to be with him.  She followed her sister down here only to find out shortly after that her sister, too, had been murdered.  Last month, she learned that her biological father was intentionally run over and killed by his long-time friend. She met the boy’s dad here in Atlanta, and they have been together now for 11 years. She and her husband both continue to hold jobs. Their family is doing very well, thanks to the community’s efforts.

The family and I were invited by Life University’s Chancellor, Dr. Guy Riekeman, to tell our story at The Rubicon Conference in Atlanta, GA. At the closing of the conference, the four boys passed out heart shaped stones to each attendee. They asked them to hold the stone daily as a reminder to be grateful.