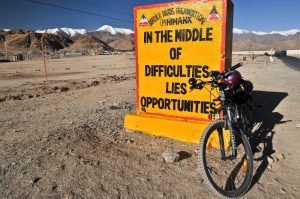 Does “desirable difficulties” seem like an impossible combination to you? Is it an oxymoron — words that combine contradictory terms? We recognize an oxymoron in terms like: living dead, organized mess, alone in a crowd, jumbo shrimp, hot ice, cruel kindness, plastic glasses, pretty ugly, a just war, or a real phony. You get the idea. But what about “desirable difficulties”?

One of the greatest insights in the last 20 years regarding learning has been psychologist Robert Bjork’s concept of “desirable difficulties.” His research shows there are many times when difficulties lead to extraordinary success. Here are some examples:

Do you have a “desirable difficulty” that will lead you to greater achievements?

In the new book David and Goliath, author Malcolm Gladwell says we’ve been misled in how we view “disadvantages.” Conventional wisdom tells us that a difficulty is something to be avoided — that it is a setback that leaves you worse off than you would be otherwise.

But people with dyslexia grow up to be the Richard Branson’s and Thomas Edison’s of the world. David Neeleman, CEO of JetBlue, has publicly acknowledged his ADHD and has chosen not to take medication for it. Instead he has learned how to use his “unique brain wiring” to his advantage, now that he better understands it.

Do you perhaps have a “desirable difficulty” in your current or past circumstances? Something that you’ve tried to eliminate?

Could it be the seed for opening the door to your greatest successes?

What do you tell people when you first meet them? Like anyone else, I can tell my life story as a healthy version or a victim version. In Dream Job, I tell a little of my own story — and like most people, my story can be framed by the “limitations” or the “desirable difficulties.”

I grew up in a home where we didn’t even have running water until I was in the 8th grade. I knew nothing but poverty. As a five-year-old, I was forced to get up at 5:30 a.m. to do my share of the farming chores — milking cows and throwing hay bales. Most Christmases I got a new pair of blue jeans — my one pair for the coming year. I was not allowed to wear neckties or fancy clothes. Because of my parents’ legalistic religious beliefs, I was not allowed to go to movies, dances, or sporting events. Our home was rigid and somber — little laughter. I received zero in financial help for college from my parents. I hated the cold weather in Ohio. Obviously, my chances for any success were limited. If only I had been born into a family with more opportunity, or so I thought.

In my family, we learned how to make good use of everything — nothing was wasted. We grew our own food, and I created toys from things other families discarded. As a small boy, I had the opportunity to experience real work and to begin my commitment to work that was meaningful — and profitable. With no TV or radio in our house, I became an avid reader and listener of the Nightingale-Conant programs, which opened me up to a wealth of wisdom and knowledge that serves me well still today.

Earl Nightingale’s The Strangest Secret had a profound impact on me — helping me believe as a 13-year-old farm kid that my thinking would shape the direction of my life. I worked right through my college years and valued the education I was paying for myself. My father’s devotion to his religious views prompted me to deep study to formulate beliefs I could be equally committed to. Today I value the work ethic and the uncompromising integrity I learned in that strict Amish/Mennonite environment.  As my own man, I wore neckties until I came to my own realization that there was more than legalism to provide a reason for not wearing the silly things. The creativity and ingenuity I experienced as a child has served me in a thousand ways in helping me “see” opportunities others miss.

Both of those versions of my life are equally true. If you’d just met me, which of those stories would make you want to get to know me more? Which one do you think makes me more confident and happier and gives me more energy today?

So, What’s Your Story?

What is your story? Even if you lost your job, your dog died, you’ve got heartburn, and they repossessed the truck – what story do you want to be replaying in your mind to move to a higher level of success?  What picture are you presenting to others? If you’re telling yourself an unhealthy story of your life, it will perpetuate the same reality.  Unquestionably, creating a healthy story could change the way you see your life — and the way others see and respond to you.

Perhaps those things you saw as “disadvantages” were simply “desirable difficulties.”

The stories of people overcoming difficulties are endless. Aron Ralston survived a climbing accident, which ended with his amputating his own right arm. He now has a bestselling book and a movie and is in high demand as a motivational speaker. Bethany Hamilton survived a shark attack but had her left arm bitten off. She has written two books, was featured in the movie Soul Surfer, and has been a guest on Good Morning America, The Tonight Show, and The Oprah Winfrey Show. Certainly, we would never wish this kind of difficulty on ourselves or others. However, why is it that challenges often seem to springboard someone past those living a normal, difficulty-free life?

Even as I write this, I’m confused by the seeming contradictions of it all. Basically, as a parent, I don’t want my children to experience difficulty, I don’t want my wife to suffer in any way, and as a career coach, I want to help people build lives of success and prosperity.

So how are you handling the “desirable difficulties” in your life? Are you avoiding them at all costs, seeing them as a waiting pattern until life gets better, and wishing you had a life with no stress or hardship? Or have you found the value, the surge of power, the new insights, the profound desire — that could only have shown up with the difficulty?

Leverage your hardships to find the high-paying work you love.

As you learn from and grow with your own “desirable difficulties,” you’ll discover:

Whatever point you’re at on the road to your “dream work,” and whatever that work looks like, you’ll now gain the inspiration, motivation, and how-to information you need to move quickly and confidently in the direction of your dreams, embracing your “desirable difficulties” and discovering the unexpected success that awaits you!