The Value of Goals and Purpose 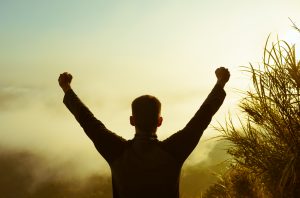 The more we learn about people and why they do the things they do, the more we realize the value and vital importance of having goals as well as a purpose in life.

I was reading a paper that had been presented at a psychological conference by Sydney M. Girard at the University of Florida in which he says, “I believe we’ll find that a man who pursues inspiriting goals,” (by this he means the sort of goals that inspire us and fill us with some intense desire for their accomplishment,) “actualizes his potentials and resists illness more effectively than people who have not found or who have lost their identity and direction.”

In another place he points out that “There is ample reason to suspect that people fall ill with physical or psychiatric symptoms because their past way of life not only has failed to inspirit them, sustain wellness and also happiness, but the present and future seem to the person to be devoid of hope or meaning or worthwhile purpose.”

It’s been written that the inmates of German concentration camps, surrounded by bestial torture, constant hunger, filth, and the daily specter of death, who could find meaning in their suffering and who had a purpose for living survived incredible stress. Medical and nursing lore bristles with unsystematic accounts of patients who had miraculous recoveries from supposedly terminal illness when someone inspired hope and a purpose for ongoing life. Freud lasted 15 or 20 years with a terrible mouth cancer, perhaps because he hadn’t finished what he started. He had a mission to complete. We also know that people become well when they’ve been treated by methods in which they have faith.

Now, it’s obvious then that if we can help a person to acquire an attitude, goal, or purpose that so affects the person that his or her entire being becomes reintegrated, the person becomes filled with a desire, the actual image of which fosters further growth and learning and gives him or her maximum resistance to infection, to germs, and to psychosis.

It was found in one study that almost all the patients admitted to a general hospital with organic illness during a one-month period had sustained some emotional crisis involving object relations shortly before the onset of their physical symptoms. Another researcher sites evidence strongly suggestive that dispiriting events that induce hopelessness are factors in the onset of ulcerative colitis.

Now this means that if we treasure health, physical and mental, we must make certain that we’re daily striving toward a goal, a fine purpose worthy of us, one that fills us with excitement and energy. We also have to learn the value of being ourselves, of finding ourselves, and of following the purpose we have independently decided upon for ourselves.

All of this shows how vitally important it is for each of us to choose a destination we feel worthy of us, to stop imitating the values of others and find our own, and find ourselves. Can you list your values right now? Who is teaching you?

Every person should ask himself or herself, who were my teachers and what were their qualifications? If we depended upon learning only from our parents, the world would never move forward another inch. The person who has wise and understanding parents is among the luckiest people on earth. We can’t choose our parent, and being parents does not at the same time confer upon a man or woman great wisdom, kindness, understanding, and knowledge. And from our teachers, we learned their specialties, or hoped we did. If we were fortunate enough to have had a great teacher who also inspired and led us, so much the better.

Socrates said, “Employ your time in improving yourself by other men’s writings so that you shall come easily by what others have labored hard for.” There are several tons of wisdom in that remark. When it comes to living successfully, turn to those who have demonstrated by their own lives or by the durability of what they have said that they knew what they were talking about.

When I was a youngster, I lived in a neighborhood surrounded by several neighborhoods marked by poverty. The people by whom I was surrounded had very little, if anything. They were people who had, as a rule, very limited educations. They were not a reading people. But despite the poverty of their lives and the poverty of their education, they would give advice on any subject under the sun. I can’t remember hearing anyone in our neighborhood ever saying “I don’t know.”

They would give you advice on every subject, and they would give you advice even if you didn’t ask for it. It seemed that they knew everything under the sun, except how to conduct their own lives in a successful manner. And the trouble with them was that they had learned what they knew and thought to be true from people like themselves, people with the wrong answers. They were good people, they meant well, but they were making the same mistakes human beings had been making for centuries. What mistakes they had not learned as children, they learned by trial and error. They had not checked the qualifications of those who had taught them.

Moreover, they had to find some justification to the poverty of their lives. They had to excuse themselves or their wives and children for their failure. To do this they related old myths and old wives’ tales or made up reasons of their own that they passed along to the children. The children, hearing these things from their parents, had no choice but to believe them. And so they learned and practiced the mistakes made by their parents and their parents’ parents and so on. Make your education your own business, and learn from those who have proved their qualifications to teach.

Longfellow wrote, “Lives of great men all remind us/We can make our lives sublime/And, departing, leave behind us/Footprints on the sands of time.”

Reprinted with permission by Nightingale-Conant Corporation

Use this information to set goals to help you live your 100 Year Lifestyle.