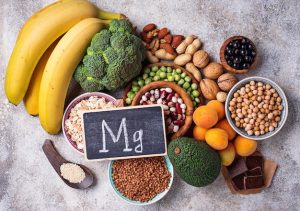 When I first learned about magnesium (Mg) in 1963, hardly anyone ever mentioned this mineral or was aware of its vital role in the human body. From my research, I learned that my kidney stones were from a Mg deficient liquid diet that I foolishly embarked upon for a short time. After this product caused the death of several people, the company stopped selling it.

Previously, in 1957, my mother also suffered from kidney stones because of a magnesium-deficient diet. Back then, the protocol was surgery to remove her kidney, which she did upon her specialist’s recommendation. Two years later (1959), additional kidney stones formed in her remaining kidney because her Mg deficiency was never addressed or even brought to her attention. Again, the protocol was to cut her open and remove 15% of her remaining kidney. Then, her specialist gave her the drug streptomycin, which made her deaf at age 35!

Despite such brutal medical malpractice, she survived. However, with four small kids, her Mg deficiency, surgeries, drugs, and medical malpractice had a terrible, life-long impact on our family. This also taught me that medical protocol was not trustworthy, drugs had harmful side effects, and sufficient Mg was necessary to prevent kidney stones. I also learned that a supplement of another mineral, manganese (Mn), could have prevented her inner ear nerve damage and subsequent hearing loss.

To help prevent a repeat of what happened to my mother or me, I learned a great deal about the many vital functions of Mg and the perils of a Mg imbalance or deficiency. Today, every health-conscious practitioner and most people know about the benefits of magnesium extraordinaire!

Not only does Mg in balance with other minerals (e.g., calcium and phosphorous) prevent the formation of kidney stones, but it also plays a crucial role in hundreds of other vital functions.

Magnesium, Mg, is a silver-white metal among five other alkaline earth series. Its atomic number is 12 in the periodic table. When used in pyrotechnics, it burns with a brilliant white flame that includes ultraviolet wavelengths. Mg is also in fireworks, marine flairs, and theatrical effects such as lightning and pistol flashes. This bright light of Mg is activated when it performs hundreds of vital tasks in the human body.

Naturally, Mg occurs only in combination with other elements, where it almost always has a +2 oxidation state. When produced in nature, it is highly reactive and burns with its characteristic brilliant-white light. But, when in the atmosphere, it forms a thin film of oxide that partly inhibits its reactivity. As above, so is below. The human body is a miniature Universe.

The vital interaction between phosphate and magnesium ions makes Mg essential to the nucleic acid chemistry of every cell of all known living organisms. Plants require magnesium to synthesize chlorophyll, which is vital for photosynthesis. Mg, in the center of the porphyrin ring in chlorophyll, functions like iron in the center of the porphyrin ring in heme. Mg deficiency in plants causes late-season yellowing between leaf veins, especially in older leaves. It can be eliminated by either applying Epsom salts, or crushed dolomitic limestone, to the soil.

Magnesium in the Body

To fully understand and appreciate the workings of magnesium in the body, it helps to learn some chemistry and a bit of history.

An ion is an atom or molecule with a net electrical charge. A cation is a positively charged ion with fewer electrons than protons that moves downward. An anion is a negatively charged ion with more electrons than protons that moves upward.  Opposite electric charges are pulled towards one another by electrostatic force. Thus, cations and anions attract each other and readily form ionic compounds.

In 1834, English polymath William Whewell) and English physicist and chemist Michael Faraday devised the words anode and cathode, in addition to anion and cation as ions attracted to the respective electrodes.

The Mg cation is the second-most-abundant cation in seawater and sea salt. Mg is highly reactive and reactivates with water at room temperature. In the human body, it is the eleventh most abundant element by mass.

Every cell in the body contains Mg.  60% of Mg in the body is present in the bones, while the rest is in muscles, soft tissues, and fluids, including blood.

Mg is essential to all cells. Over 300 enzyme reactions require magnesium ions for their catalytic action, including all enzymes using or synthesizing ATP and those that use other nucleotides to synthesize DNA and RNA. The ATP molecule is in a chelate with a magnesium ion. 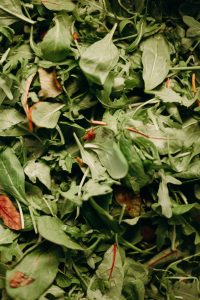 Mg is involved in hundreds of reactions in the body, such as:

Foods containing Mg are only Mg-rich if they are organically grown by a farmer that uses nutrient-rich fertilizer containing magnesium.

Organic spices, nuts, cereals, and cocoa are good sources of magnesium.  This is why women often crave dark chocolate before their period when their body’s level of Mg drops. Unfortunately, most chocolate contains sugar that depletes Mg. Green leafy vegetables, such as spinach, kale, and chard, are rich in magnesium.

Rooibos Tea, organic from South Africa, contains Mg and is rich in antioxidants and flavonoids. It is low in tannins, caffeine-free, and served either warm or cold.

In the UK, the Recommended Daily Values for magnesium are 300 mg for men and 270 mg for women.  In the United States, the Recommended Dietary Allowances (RDAs) are 400 mg for men ages 19–30 and 420 mg for older; for women, 310 mg for ages 19–30 and 320 mg for older.  However, these levels do not reflect how much Mg is required to maintain good health in today’s stressful world. True dietary recommendations vary, depending on many factors, such as age, body type, lifestyle, health, medications, environment, and biochemical individuality.

Mg supplements come in many forms: 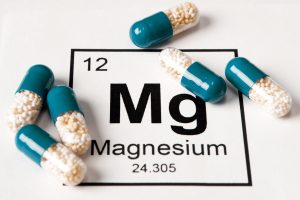 Each form has its merit.  However, cheaper forms such as Mg oxide and Mg carbonate are less bioavailable than other forms.

Excess Mg is a rarity as it is necessary for hundreds of body functions and is often deficient. Plus, excess Mg is cleared from the body by the kidneys. However, people with renal problems, kidney failure, or Addison’s disease are more likely to absorb too much magnesium.

Magnesium Chloride (MgCL2), is well absorbed and has many benefits. In North America, it is produced primarily from Great Salt Lake brine. Other sources are the Dead Sea brine in the Jordan Valley or the evaporation of seawater. It comes in higher concentrates as the mineral bischofite (MgCL2.6H2O) from ancient seabeds such as the Zechstein seabed in NW Europe. Hydrated Mg chloride (MgCL2.nH2O) is highly soluble in water.

Elektra uses Mg chloride in its transdermal creams, lotion, and oil, making it superior to other brands.  Elektra Magnesium Via Skin is their US Distributor.

Terra Aqua and Mia Aqua, by Masters of Health Spa, are two divine, chakra-balancing body spray mists that nourish with Mg chloride and essential oils while producing a heavenly experience.

Since 1618, practitioners have used Mg sulfate (MgSo4) to treat arrhythmia, constipation, high blood pressure, injuries, poisoning from lead, barium, and chloride, seizures, aches, muscle pain, sore feet, and other ailments. Also, it is used as a bronchodilator for asthma and is on the WHO’s list of essential medicines.

Epsom Salts (MgSO4.7H2O) are crystals of hydrated Mg sulfate heptahydrate that come from a bitter saline spring in Epsom in Surrey, England. It is a natural source of both magnesium and sulfur. Epsom salts are a purgative, exfoliant, muscle relaxer, and pain reliever in baths.  However, these are different from Epsom salts used for gardening because they contain aromas and perfumes which are unsuitable for plants.

Read Magnesium Extraordinaire – Part 2 in the November issue of  Masters of Health Magazine.