How Aging Affects Vulnerability: A Tale of Two Men

How aging affects vulnerability? Does it? The short answer is no, it doesn’t—or at least it doesn’t have to. One significant thing, that we’ve learned through the principles of the 100 Year Lifestyle, in our chiropractic practice, and in the chiropractic practices that we work with around the country and the world, is that we need to stop blaming age.

We have shared the story of Max, the 100-year-old man who inspired The 100 Year Lifestyle. His entire story is on our website. Max came to us as a 98-year-old in a decrepit body due to a lifestyle of neglect and poor choices. However, he responded to and improved with chiropractic care. Max showed us the potential of the human body and its innate ability to heal. He taught us that you’re never too old to heal, and that age does not determine vulnerability. However, his wasn’t an easy road due to the lifestyle choices that he made during the majority of his lifetime.

Henry Denton, on the other hand, has had a very different experience. Henry is a ballet dancer born in England. He traveled the world as a dancer, first coming to the US in 1946, and today calls Mississippi home. In 2019, Henry made the news for turning 100 while continuing to work full-time as a ballet instructor. Henry was quoted from his interview with the Today Show as saying: 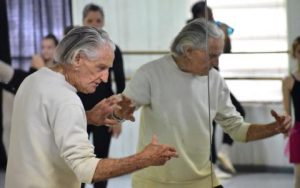 “It’s absolutely possible to be healthy at 100, as long as you take care of your body. It’s a gift from God and you’ve got to look after it.”

Henry differs from Max in that, while he, too, never anticipated that he would live so long, he never ruled it out either. Henry, without realizing it, just learned to love all the 100 Year Lifestyle principles. He moved his body continuously, ate a healthy vegetarian lifestyle starting at age 49, rarely had the need to see a general practitioner or specialist, maintained a positive outlook on life, and continued to learn. He also was living alone and was driving (might still be). And he never stopped working.

“I see people who retire and they become so bored, they don’t know what to do with themselves, Danton said. “That’s when their health starts to go down. I love teaching, I don’t want to stop. Children are my vitamin.”

Henry overcame everything that came his way, including a non-Hodgkin’s Lymphoma diagnosis in his late 40’s, the same disease that took his brother’s life. And presumably, Henry is still going. The latest article we were able to find about Henry online was from February of 2020, congratulating him on winning the Governor’s Arts Award for Lifetime Achievement in Dance in his adopted state of Mississippi. And the article mentioned he was still teaching.

So, the point here is…you’ve been given notice. Your 100 Years are waiting. How will you live them? What choices will you make? What lifestyle makes sense to you?

Start on your 100 years by finding a chiropractor at 100yearlifestyle.com