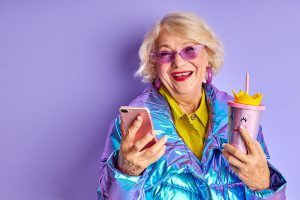 Is being a granfluencer in your future? Have you even heard of granfluencers? Well, they are a growing wave of seniors (and centenarians) who are taking to social media  in a big way. These content creators and influencers are becoming social media starts, inspiring and enlightening fans much younger than themselves. From TikTok to Instagram they breaking down stereotypes and in most cases creating a lucrative second act career.

Remember our story about Dr. Howard Tucker, neurologist and world’s oldest living physician at 100 years old? Well, with a little help he’s also become the latest TikTok sensation. His goal is to inspire young people to find work that they love and can keep doing for the rest of their long and healthy lives. He says he’s having fun – with some posts receiving over 3.5 million views.

While Dr. Tucker might be in a league of his own as a centenarian on social media, there are plenty of other folks on their way and living their 101 Year Lifestyle in the process.  Lyn Slater, 68, is a social justice professor who is using fashion to fight stereotypes about aging. Known as the “Accidental Icon,” she’s found a way post-retirement to earn her professor’s salary in just a few hours of work as an influencer. She shared the secret to her success with CBS News. “That was the reason I did become popular and I did become successful, because I was conveying this attitude, ‘Look at how cool I am and I have gray hair and wrinkles, and I’m not going to let anybody make me be invisible,'” Slater said. “It involves getting out of your comfort zone. For me, if I don’t keep growing, that’s when I’m going to wither up.”

Joan MacDonald, 75, has 1.4 million Instagram followers, many of whom followed her transition from an overweight 71-year-old in ill health and taking multiple medications to the picture of health with a bodybuilder’s physique. This late-bloomer found her 100:100 stride at 71 and has gone on to inspire others with her journey. And she’s turning her efforts into gold through partnerships and her own app.

If you’re thinking that it’s only people in their age group who are following these granfluencers, think again. “It’s so rare to find someone her age being able to do all these things,” said one of Joan MacDonald’s admirers, 18-year-old Marianne Zapata of Larchmont, New York. “It’s just such a positive thing to even think about.”

Interested in having a big impact? Want to share your wisdom with you and old alike? Maybe being a granfluencer is something you should consider. Most of these folks knew nothing about social media when they began. They tapped their Surround Sound Support System for the help they needed to get started, and then never looked back.

If being a granfluencer isn’t your thing, remember that there are an unlimited number of ways to create your 100:100 at any age. It’s literally never too late! If you want to stay healthy on your long and exciting journey, find a 100 Year Lifestyle provider near you today!