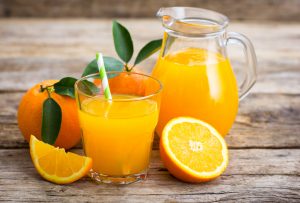 In 2015 the USDA reported orange juice was the most consumed fruit juice in the United States and oranges were the second most consumed fruit overall, just slightly behind apples. The average person in America consumes  2.7 gallons of orange juice and 3 pounds of oranges each year. “100% Pure Orange Juice” is a common claim used by many juice brands that allow consumers to feel safe when serving it to their families daily. However, recent testing revealed that every one of the five top orange juice brands Moms Across America sent to an accredited lab tested positive for glyphosate weed killer. Glyphosate is the declared active chemical ingredient in Roundup, manufactured by Monsanto, and 750 other brands of glyphosate-based herbicides. Roundup is the most widely used herbicide in the world, often sprayed as a weedkiller between citrus trees, found in irrigation water and rain.

Moms Across America founder Zen Honeycutt stated, “The discovery of glyphosate residue in orange juice is unacceptable, especially since a branch of the World Health Organization designated glyphosate a probable carcinogen, two years ago, back in the spring of 2015. The EPA has had ample time to revoke the license of this chemical and restrict its use in our food and beverage crops. As confirmed by the American Academy of Pediatrics, our children (who frequently drink orange juice for breakfast) are especially vulnerable to pesticides and measures should be taken immediately to protect them.”

Two samples of each of the following brands were tested for both the herbicide glyphosate and its residue AMPA. Positive results ranged from 4.33 parts per billion (“ppb”) to an alarming 26.05 ppb. Chemical farming proponents will claim that these levels are too low to cause harm, and are lower than the EPA’s allowable glyphosate residue level of 30 ppm on citrus, but these claims are irrelevant in comparison to new data. Studies have shown that only 0.1 ppm (100ppb) of glyphosate destroys beneficial gut bacteria, weakening the immune system, which can lead to a wide variety of health and neurological issues. Considering the standard American diet high wheat, sugar, oatmeal, soy, and corn, with levels of up to 6000 ppb or 1.67ppm have been detected,  a child can easily exceed the 100 ppb if a glass of orange juice is added at  26 ppb.

Additionally, 1 part per trillion (ppt) has been shown to stimulate the growth of breast cancer cells.  1 ppt is equivalent to 1 drop in the water of 22 Olympic swimming pools combined. Considering that studies show glyphosate bioaccumulates in bone marrow, any amount ingested is unacceptable.

The full report can be seen here. The testing methodology was “Glyphosate and AMPA Detection by UPLC-MS/MS.”

In addition to being listed a carcinogen on California EPA’s Prop 65 list in July of 2017, a study published in January of 2017 proved chronic consumption of low levels of Roundup (which contains glyphosate) caused fatty liver disease in animals. Only 0.1 ppb (50 ng/L glyphosate equivalent dilution; 4 ng/kg body weight/day daily intake) was confirmed to cause liver dysfunction. According to the Liver Foundation 1 out of 10 American now has liver disease.

Earlier studies have demonstrated that Roundup has an endocrine disrupting effect which can lead to birth defects such as anencephaly (small or missing brain), miscarriages, and infertility. The EPA knows about the negative health implications of glyphosate. However, it has refused to ban this harmful chemical. Actually, it even permits the manufacturer to make claims that the product is safe when “used as directed.” 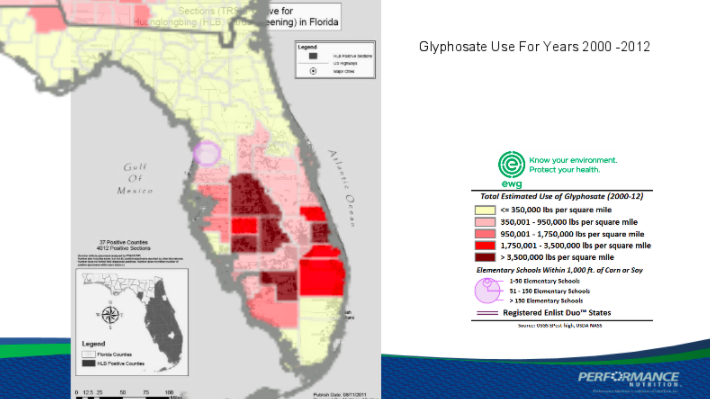 Florida is a central location for growing citrus. Up to 3.5 million pounds of glyphosate per sq. mile has been applied in Florida over 12 years. The environmental impact on fish, birds, wildlife, and water quality is unknown.

However, even when it is “used as directed,” studies show glyphosate is harmful in minute amounts. Why? Because of how it functions. It is known as an endocrine disruptor. This chelator causes mineral deficiency, antibiotic, and organ damage. Glyphosate herbicides also inhibit enzymes and increase the impact of other toxins and heavy metals. Copper is often used to kill bacteria in the citrus industry. Copper is also toxic to sperm and is so destructive that it’s commonly used in IUDs, a widely used form of birth control. By allowing glyphosate to be sprayed on oranges and other crops we increase the potential impact of copper and its contribution to the rapid decline of sperm quality and sterilization. When we offer orange juice, a favorite breakfast drink, to the males in our lives this is not a typical consideration most Americans knowingly contemplate.

Conventional citrus growers often insist that harsh chemical herbicides are necessary to maintain crop production. They also say it prevents competition for water between weeds and the orange trees. However, Dr. Don Huber, Purdue University professor, farmer-educator, and plant pathologist has stated that this is untrue. Actually, he says water usage is increased by using glyphosate, as are fungal disease and other problems. Furthermore, he emphatically asserts that “the science and epidemiological data show glyphosate is NOT safe.” Moreover, he has found many disadvantages to glyphosate use, including a reduction in productivity. He is concerned that the USGS showed that counties in Florida, a mecca of citrus growers, had as much as two tons per square mile of residual glyphosate/AMPA in them.

Some of the disadvantages that he has identified are:

1. “Glyphosate reduces water-use efficiency by 50% so it takes twice as much water with glyphosate than it would be using a bracharia grass mulch for weed control as was done by citrus growers in Brazil.

2.  Citrus growers who use glyphosate herbicides will lose more trees from citrus variegated chlorosis (caused by xylella fastidiosa and sometimes called citrus blight or CVC) with glyphosate-use and will soon be in the same position as they are with the imminent demise of their olive production from this disease – and for the same reason.

3. Nutrient availability, water infiltration into the soil, and natural biological controls of their soil-borne diseases are all greatly reduced by glyphosate’s mineral nutrient chelation and antibiotic activity.  It takes more fertilizer to compensate for the reduced nutrient availability. ”- Dr. Huber

Farmer educator Bob Streit added, “In reality, citrus production is down by over 50% from ten years ago due to the irrigation water being polluted by the pesticide. Independent soil analysis by qualified labs and the USGS (US Geological Survey) have confirmed the contamination of both the soil and water. The chelation effect is weakening the trees so much that they are being killed by weak bacteria.”

The fact is that the EPA admitted to a team of scientists and myself, in person, that they do not have any long-term animal studies with blood analysis on any of the final formulations of Roundup. Furthermore, as it is their policy to only require safety studies on one declared active chemical ingredient, not the final formulation of any chemical products,  it is scientifically unfounded to claim that final formulations of glyphosate-based herbicides are safe in any capacity or amount.

Due to the growing body of evidence that demonstrates the severe harm caused by glyphosate-based herbicides, Moms Across America and a consistently increasing base of consumers are asking food manufacturers to discontinue the use of glyphosate immediately. Letters were sent to the CEOs and board members of the manufacturers of the orange juice brands that were tested in June of 2017. However, none of the manufacturers responded except for Costco, who replied that consumers have an option to select their organic brand. Consequently, we were not assured that they would encourage conventional orange growers to discontinue the use of glyphosate and switch to organic methods as was requested.

Organic growers, who are not legally permitted to use glyphosate herbicides, utilize safer alternatives that are available. Many people cannot afford organic, however, and turn to products labeled “Natural” instead. However, the term “natural” on a package of a food product that contains glyphosate weedkiller is widely considered misleading. It is also potentially harmful to the consumer.

Safer alternatives are available. Biostimulants, a more natural alternative, have been shown to have positive effects. Also, they come in a range of different products including beneficial soil bacteria, fungi, humic substances, and seaweed extract. According to the University of Florida’s Institute of Food and Agricultural Sciences plant physiologist Dr. Ute Albrecht, research indicates the biostimulants “have positive effects on plant growth and also on crop yields.” As a result, she is now studying biostimulant use in citrus. Additional alternatives are also available, such as steam weed control, cover crops, mulch, and bio-diverse farming.

Due to the enormous spike in cancer and chronic health issues in the United States since the advent of GMOs and glyphosate, as well as the considerable amount of scientific data to support a correlation, thousands of citizens are now urging regulators, farmers, and pesticide applicators to discontinue the use of glyphosate and toxic chemicals immediately. Nearly 1,000 individuals have sued Monsanto due to the connection between non-Hodgkin Lymphoma and Roundup.

Certainly, the EPA approval of glyphosate must be denied. Additionally, consumers and farmers alike would benefit from using alternative methods in citrus growing.