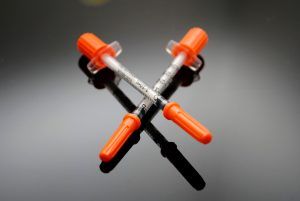 Flu Shot marketing is in full swing. But before you blindly allow yourself or a loved one to be injected, it is important to do your homework. You will learn why 60% of MDs avoid the vaccine, and why it can be more dangerous than the flu itself.
Here are some Flu Shot Fallacies:

Fallacy: Flu medicines are safe with no side effects

According to Drugs.com, the possible side effects of Tamiflu are nausea, vomiting, diarrhea, dizziness, headache, nose bleed, eye redness, insomnia, cough or other respiratory symptoms. Additionally, serious side effects in children can be sudden confusion, delirium, hallucinations, unusual behavior or self injury.

Nervous system side effects such as headaches have been seen in up to 18% of the people. When you go to the Drugs.com website to explore these for yourself, don’t just read the side effects for consumers. Continue reading what the health professionals are told to watch for. That list is much longer and more severe.

Fallacy: Flu vaccinations are safe with no side effects

According to NVIC, Gillian-Barre syndrome (GBS), an autoimmune disease, has been associated with the influenza vaccine since 1976. There is also a concern about idiopathic thrombocytopenia purpura (ITP), another autoimmune disease which is a blood clotting disorder, and Bell’s Palsy facial paralysis.

Seniors are especially at risk as reported by the ACIP Provision Recommendations for the Use of Influenza Vaccines. In 2007, a study published in the Annals of Medicine concluded that abnormalities in arterial function and LDL oxidation may persist for at least two weeks after a slight inflammatory reaction. This could explain the earlier report of an increase of cardiovascular risk in the first weeks following vaccination.

Pregnant women should be aware as the flu vaccine has been officially listed as a Category C drug which means that its safety has not been established scientifically and adverse fetal effects in animals have been detected. The FDA states that “Category C drugs are more likely to cause problems for the mother or fetus.”

Specifically, there is no scientific evidence that supports the effectiveness of flu shots in preventing the flu. In fact, Michael Osterholm of The National Center for Infectious Disease Research and Policy boldly stated that “flu shots don’t work in the elderly.”

Actually, the possibility of the vaccine impairing your immune system is a concern. There are components in vaccines that are neurotoxins which can depress your immune system and brain function.
According to the CDC, the flu vaccine, FluMist, which is often given to children, contains chick kidney cells and MSG. Many other flu vaccines contain formaldehyde and mercury which are neurotoxins. Christina England, a contributor on VacTruth.com just informed readers that there has been a 4,250percent increase in fetal death rates reported to VAERS after flu shots were given to pregnant women. That statistic is insane.

Not everything that feels like the flu is actually the flu. According to the CDC, only 13percent of the people with flu-like symptoms who were tested for the flu this year tested positive.

Exercise can also strengthen your immune system so follow the plan in The 100 Year Lifestyle Workout and Get Your ESS in Shape – your endurance, strength and structure. Build your endurance through cardio vascular training such a walking, riding a bike, running or fitness classes.

Adjust your lifestyle today and build your immune system naturally.

4,250% Increase in Fetal Deaths Reported to VAERS After Flu Shot Given to Pregnant Women