Ancient Grains for a Healthy Body 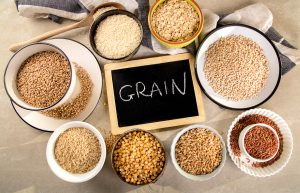 In this article, I’ll be taking you through three Gluten-Free Ancient Grains – some nutritional background, preparation, tips for speeding up meals and snacks and then preparing some offerings for you to taste!

When we look at the healthiest populations, most of them have diets that are very high in whole grains, along with lots of plants and minimal animal products.

We tend to be obsessed with protein, but I think we need to turn our attention to fiber. We are learning more about gut health every day, and it usually comes back to the balance of gut flora.

Fiber feeds the gut, and whole grains are a great source.

However, as delicious as it is, one can only eat so much quinoa. So if you’re craving something different in your ancient grain routine, but don’t know where to begin, try my top three recommendations

Many ancient grains thrive with lower levels of pesticides, fertilizers, and irrigation, making them an attractive choice to consumers who choose to shop with their carbon footprint in mind. However, the best way to ensure that you’re getting the full spectrum of nutrients available in nature is to eat a variety of diﬀerent grain foods. After all, each whole grain has something diﬀerent to oﬀer (from the calcium in teﬀ to the soluble ﬁber in barley), making it impossible to play favorites.

What are grains, anyway?

Like the legumes and nuts with which they’re often grouped, grains are seeds. In other words, hyper-concentrated packages of all the nutrients and energy it will need to turn into a self-sufficient plant.

More specifically, the grain can be broken down into three edible parts:

So now that I’ve got them, what should I actually DO with them?

There are three common ways to tackle grains; the method you choose will largely have to do with the grain you’re using and the texture or flavor you’re looking for.

Before I get started, should I rinse or soak my grains?

Though many recipes will direct you to rinse grains, the vast majority of commercially available whole grains won’t actually need it. But if you want to do it anyway, just make sure to rinse immediately before cooking—otherwise, you run the risk of moldy or sprouted groats. Soaking a grain overnight, on the other hand, can help reduce the stovetop time for slow-cooking grains like spelt or barley and, according to some, produce more evenly cooked results. If you’re planning ahead, it’s never a bad idea.

Wait, but how will I know for sure when they’re done?!?

Beware of recipes claiming to be foolproof. Even different batches of the same grain can vary in the amount of liquid and time they’ll need to finish.

Your best friend is your mouth—when you’re familiarizing yourself with a new grain, taste it regularly. Some like their grains al dente; others like them on the mushy side. But if you’re really unsure, you can cut a grain in half: If there’s still a white, opaque center, it’s not fully cooked (though it’s certainly still edible if that’s how you prefer it); if it’s the same color throughout, you’re definitely good to go.

Now I’ve got a ton of leftovers in my fridge. What’s the best way to reheat whole grains?

Before you go about reheating, hit the pause button! Chilled grains make a great base for tossed salads—some chopped vegetables, a sprinkle of cheese, and a drizzle of vinaigrette and you’ve got a surprisingly well-balanced meal. Otherwise, if you have a microwave, you can reheat grains in a bowl, covered with a paper towel. Or go the stovetop route—add the grains and a splash of water to a pot and steam them, covered, over medium-low heat until they’re soft and warm.

While bulgur wheat is definitely a step up from refined carbohydrates or sugary foods, it’s still best to have in moderation. And if you have a known allergy or gluten sensitivity, you should avoid bulgur wheat altogether and have gluten-free ancient whole grains like quinoa, amaranth, buckwheat or brown rice instead.

Gluten-containing grains should also be avoided if you have leaky gut syndrome or candida since gluten can aggravate these conditions.

With a consistency that goes great in grain-salad dishes, make tabbouleh by mixing bulgur with lots of chopped parsley, tomatoes, cucumbers, lemon juice, and olive oil.

This ancient grains is wholesome and has got a great nutty flavor. Most of the crop in this country goes into animal feed or is used for biodegradable packaging, but it’s gaining popularity as a food.” Gluten-free sorghum contains a phytochemical called policosanol, which may help manage cholesterol levels. Although sorghum is most often used as flour to make gluten-free breads, Caspero suggests trying it as “popped sorghum,” an alternative to popcorn.

Sorghum is a super grain. It is gluten-free and has a low GI index (meaning its great for keeping you satiated (full) for a few hours, as well as keeping your blood sugars stable. It is a very unique grain which is rich in anti-oxidants, Sorghum is very high in fiber and a great source of protein.

As is true for many grains, this plant-based food, Sorghum spread through the world via the Silk Trade from Africa more than 8000 years ago and was eventually cultivated in China and India. An Indian flatbread called roti is made with sorghum flour or otherwise known as Jowar flour. We have always had sorghum as part of our daily diet in our home and I am so blessed that my mom taught me so many recipes using Sorghum/Jowar.

Sorghum has a very cool texture and a nutty flavor.  It’s a nice departure from eating rice. It really a wholesome and hearty grain. And from a culinary point of view, Sorghum is a very versatile grain and can be used in dishes like salads, smoothies, in pilafs, stews, and you can even use this grain in baked goods. One of my favorite uses is popping sorghum. You can eat it on its own or use it as a healthy topping on salads or even shrimp to give that extra crunch!

Sorghum cooked properly with some healthy fresh olive oils is a nutritional powerhouse.

Sorghum is a high-energy whole grain you should add to your child’s diet. With nearly 75 percent complex carbohydrates and rich in B-complex vitamins, sorghum is an excellent choice to keep your kids focused all day long.

Sorghum is also high in protein, the building blocks for bone and muscle development. Sorghum’s nutritious goodness will help your kids stay full longer to tackle the school day with ease. Remember, good nutrition can improve your child’s brain function, energy levels and moods at school.

If you are a lover of grain and looking for that excitement and creativity, I would definitely introduce Sorghum in your diet.

If you come across something that looks very similar to pearl barley – spherical in shape, pearl in color, having a brownish groove on one side, but is about twice the size of it, then it is probably coix seeds. Yet it is better to clarify before you pay because I have seen Job’s tears being labeled as pearl barley (wrong in English but correct in Chinese!).

Though relatively unknown in the West, coix seed/Job’s Tears is a common ingredient in China, Korea, and Thailand. It’s used to make tea and alcohol, and used with other herbs in traditional Chinese medicine. It can be cooked just like rice until plump and tender; it has a starchy texture and sweet, corn-like flavor that lends itself well to soups or stews.

There are sayings that coix seed is called “Job’s Tears” because of the biblical Job of the Old Testament, who frequently tears from the sufferings he endured.

Among Chinese, coix seed has been valued for its “cooling” property, a concept related to Chinese food therapy, for acting on an “inflamed” human body, mostly occurred after taking considerable spicy, grilled or barbecued foods. Chinese Medicine classifies the nature of Job’s tears as slightly cold and sweet and they are attributive to spleen, stomach, lungs, liver, and large intestine.

Chinese herbalists have regarded the seeds as being capable of:

However, they suggest that it is not suitable for pregnant women. But there are claims mention that coix is good for nourishing the skin making it look soft and smooth.