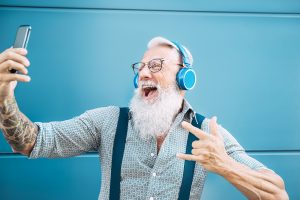 When it comes to technology, George Reynolds is a teenager – a 100-year-old teenager. This U.S. Navy veteran and pastor has lead a full life, experienced a lot of what life has to offer, and has developed many interests along the way. His 100 years have been filled with good days and not so good days.

Starting work at a very young age, he joined the Navy to get an education. His experiences sailing across the Atlantic in 1941, changed him from an agnostic and ultimately put him on the path to becoming a pastor. Today, George spends his time going between his favorite screens and the great outdoors in his beloved Elkton, Maryland. “I like YouTube. You can look up anything on YouTube,” he said of the online encyclopedia of audio and video clips. “I love computers and cellphones and iPads.”

He’s also on a mission to save the American chestnut tree. Reynolds hopes to collect seeds and start seedlings to rebuild the population. And why not? George has clearly been living his 100 Year Lifestyle, 100:100, 100% for 100 years. And there doesn’t appear to be an end in sight. Why should there be? Just because of a number? This centenarian has a lot more to do. Keep reading.