Suicide In The Medicine Chest 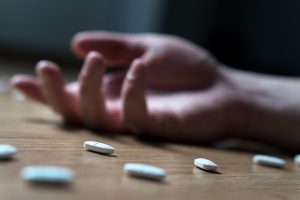 Suicide is in the news and in more medicine chests than ever. Sadly celebrities, veterans and ordinary people are taking their own lives at an alarming rate. This is tragic. Unfortunately, one of the primary causes, prescription drugs, is being callously brushed aside and swept under the rug. The rates are skyrocketing so much that for the first time in recent history, life expectancy in the United States has taken a downturn.

Opioids are a primary culprit. These highly addictive pills are prescribed by doctors for post surgical recovery, acute and chronic pain as well as many off label uses. Now responsible for more fatalities than car crashes. these brain altering drugs can cause even the strongest individuals to act like wild dogs searching for food. The depression and withdrawal symptoms are dangerously powerful and change people forever.

Pain killers have become people killers as one side effect of these medications is suicide. Over 2 million people a year, according to the American Society of Addiction Medicine, are abusing these medications and many of them are as young as 12. This is a very sad and dangerous situation especially when you consider the number of young people involved.

Nobody plans on becoming an addict! People go in for what they think is a simple orthopedic, organ, oral or other type of surgery and they become addicted. Parents who want to “take the pain away” from their kids unsuspectedly cause and feed these addictions. Individually and as a society we must realize and face this problem head on. The reality is…

Both over the counter drugs and prescription drugs can be very dangerous and should not be taken lightly. Doctors should seriously consider the short and long term well-being of their patients including intensive lifestyle modification consultations prior to prescribing these dangerous medications. The movie industry needs to stop glorifying and sensationalizing them in films, especially those targeting young people. Media companies and news agencies need to find other sources of revenue and take drug ads off their stations. Drug companies need to stop producing them and promoting them directly to the public and reduce their promotion to doctors. And the public needs an intervention and should stop bullying their doctors into prescribing them.

The concern has hit critical mass and more people are turning to drug-free health care solutions, first. Chiropractors, and other holistic practitioners, have been leading this movement for nearly a century and as the drug casualties mount, they are being heard more than ever by individuals and families who want drug-free health care. Fortunately, more people are utilizing these providers first and as a part of a lifestyle instead of seeking a pill for every ill.

Wake up to this reality and raise your awareness. Don’t become an unsuspecting victim and protect your family from this issue.

We must begin to make different choices. Even drugs for conditions like acne, depression or ADHD are causing suicide as the highs of chemically changing the brain can quickly lead to terrible lows.  Before you ever take a medication for anything, you should become aware of their side effects, especially suicide and address the lifestyle and neurological issues first. While we will not cover all of the scenarios in this article, we will give you  enough information to raise your awareness, provide a wake-up call and possibly help you save a life.

The list of medications that indicate suicide as a known side effect is long and alarming. Here is a short list that warns against suicide as a side effect and the associated condition for which it is used.

Much or society’s drug dependency can be avoided with lifestyle changes and it is taking years off our life and life off our years.

On January 2, 1903, Thomas Edison stated, “The doctor of the FUTURE will give no medicine but will interest his patients in the care of the human frame, in diet, and in the cause and prevention of disease.”

Edison was right, and the future is now. In 2010, I updated Edison’s quote in The 100 Year Lifestyle Second Edition to read, “The doctor of the PRESENT will give no medicine but will interest his patients in the care of the human frame, in diet, and in the cause and prevention of dis-ease. Be present!”

As a last resort or in the case of genetic conditions, these drugs have a place and may be necessary. Unfortunately, they have become a first resort and addiction for too many. Turn your medicine chest into a bathroom cabinet. Work with your body’s innate ability to heal naturally and function at its highest level. Become a more patient patient with a long-term plan for optimizing your potential and you are more likely to enjoy the long, healthy quality life you deserve.