Zen Honeycutt is the founder and Executive Director of Moms Across America. This moms shocking discovery regarding glyphosate may literally save a generation of children. Watch this interview now!

In our recent interview, she describes the ubiquitous nature of Glyphosate and how independent lab tests found that this proven, toxic substance was found in 5 out of 5 va((ines. This means that we may literally be injecting “probable carcinogens” into our babies and pregnant moms.

With new mandates on the table in every state and country, the call to action is vital and we need to act now.

We must demand independent, the highest level of science, double-blind safety and efficacy testing of every va((ine, including COVID, prior to their distribution, and especially prior to any mandate even being considered. With this new knowledge, not doing so would be criminal!

Monsanto/Bayer just paid out a $10 billion settlement to thousands of plaintiffs and there are tens of thousands of additional lawsuits pending.

You can watch or listen to the entire interview here now, on our social media pages and podcast. And spread the word. Our children’s lives may depend on it.

Here is the first portion of the interview.

It’s not based on science, it’s inaccurate. And as a mother, I am really, as you said, emotionally outraged that I was convinced by my doctor and my doctor was convinced by the pharmaceutical companies, that these vaccines were safe and effective and they were needed. I was told to give them to my son, looked me in the eye and begged me crying, screaming, not to give them to him. And I said it’s okay. Ben it’s going to be like little soldiers that I’m in, that they’re injecting into your body. Those little soldiers are going to fight off the bad guys. I asked him to trust me. And I regret that moment so much because after that he had all kinds of allergies. He almost died on Thanksgiving evening. So I’m a pecan and a stuffing kids. Weren’t dying from Thanksgiving stuffing 20 years before that…

Welcome to the 100 Year Lifestyle Podcast dedicated to you and your loved ones living at 100% for 100 years and beyond. I’m your host, Dr. Eric Plasker.

Welcome everybody to the 100 Year Lifestyle where we are transforming health and longevity worldwide. And we have a special guest today. Please welcome Zen Honeycutt from moms across America. Zen, welcome to our platform.

Thank you so much. And thank you to all the viewers. I appreciate being here.

You’re doing great work moms across America. We were talking just a little bit ago near and dear to my heart. We’ve been working with moms across America and around the world through the 100 Year Lifestyle and our organization, The Family Practice helping lots of doctors, chiropractors who are the primary healthcare providers, first-choice for so many families that are looking for a holistic way to live, looking for confidence in raising naturally immunized kids versus artificially vaccinated, immunized types of kids, and, and having confidence, giving them the confidence to be able to do that. We’ve done that for ourselves and our families, and you are uncovering through your work, very important things that our doctors and our communities need to know. So thank you for your work. 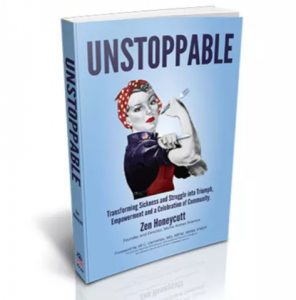 Well, thank you very much for this opportunity to share with your viewers and also thank you for your support and not just you and your practice, but, but to chiropractors across the nation, you know, going back to GMO, labeling on this va((ine issue, glyphosate, GMOs chiropractors have been the forefront of healthcare providers in speaking out. And so I truly appreciate your courage and your dedication to the wellbeing of our families. I, myself and my family sees a chiropractor frequently.

And I have to say it clears up so many issues. I mean, we just, we feel like a new person afterward and we don’t need pain medication, which we don’t want to take anyway, because of the pain shows us where we need to pay attention to our bodies. So we are huge advocates of chiropractic care and nutrition, of course, incorporating that. And so we’re very excited to be on this platform and to collaborate with you.

Well, thank you. And, uh, you know, it’s interesting when Lisa and I have been married 32 years when we think back to when we were making the choice to not vaccinate our children, which back 32, you think it’s crazy. Now you should have seen it back then. It was, you know, we were crazy people. The world thought we were nuts, but we had the opportunity to have religious exemptions. We have the opportunity for personal exemptions, which are trying to be eliminated all across the country on vaccines that we know have had no double-blind study safety testing, no double-blind study efficacy testing, but now looking to eliminate all of those exemptions, and there are so many battles against this happening around the country and around the world.

And then you’re onto something that you really, I think you started it this year. I want you to tell the whole story about this. You had the idea that, Hey, I wonder since glyphosate, which is the bad ingredient that is in Roundup, which I did this statistic here. How about this 1.4 billion pounds distributed worldwide every year? How crazy is that? It is ubiquitous. It is everywhere. 1.4 billion pounds, crazy number. What did you learn? What did you do? Why did you do it? And what did you learn?

Okay. So first of all, what I learned is the ingredients in vaccines, they were posted on Facebook. This was actually years ago. And for the first time after having a nine-year-old child and having almost fully vaccinated him, I read the ingredients in vaccines and I saw it. I thought, wait a second. Many of these ingredients could be GMO or derived from animals, which eat GMOs, which are sprayed with glyphosate. And we know that glyphosate, which is the declared active chemical ingredient in Roundup and 750 other glyphosate-based herbicides does not wash dry your cook-off.

So could sugar, which is in vaccines and other types of dairy products and other types of products. So there could be many reasons why glyphosate would be in vaccines. And so I sent off five childhood vaccines, including a flu shot to a lab, which tested for glyphosate. And granted, this was a screening. This is not necessarily like the most accurate form of testing, but it does. It is considered accurate for the presence of glyphosate could be more, could be less right, but is it there all five of them came back positive?

And this was shocking because when we sent 20 samples of PDO shore feeding tube liquids to be tested previously only six came back positive. So we thought if it’s there, maybe it’ll be in one. You don’t not all five. And the MMR vaccine was the highest. And what we learned through speaking to scientists like Anthony Samsel and Stephanie Seneff that the MMR vaccine has more gelatin in it.

Gelatin is derived from pigs, which of course we know in the United States eat GMOs, raper, glyphosate, and the pig tendons are ground up and made into a stabilizing agent, which is gelatin in vaccines. Up to 25% of a vaccine can be this gelatin in an MMR vaccine. And that had 25 to 34 times higher the amount of glyphosate than the other vaccines.

This was confirmed by Sam Zell, who also did a test at 14 vaccines. So this was, you don’t mind-blowingly, just shocking and disturbing because not only is it incredibly upsetting to have glyphosate, you know, weed killer in vaccines and being injected into our most vulnerable population, uh, or anybody, right? We also know that glyphosate can break down the blood-brain barrier and allow toxins into the brain. And glyphosate can go through the blood-brain barrier by itself without even breaking down the blood-brain barrier. According, according to Stephanie Seneff and bring in aluminum and aluminum is in vaccines. So we’re, we really believe this is a major contributing factor to autism in, in America. Well,

Nevermind. The fact that they’re, they’ve never been all tested together in a bowl of soup called vaccine soup. These things are being, uh, we know that they’re all individually not good. And now you’re finding them in five out of five vaccines. So what does this mean? And why should we be concerned?