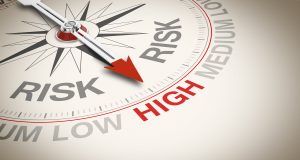 In order for you to be healthy and to have a healthy country, we need a non-negotiable policy of informed consent, not misinformed coercion.

Informed consent is defined by the Cambridge Dictionary as “agreement or permission to do something from someone who has been given full information about the possible effects or results:

Coercion is “compelling a party to act in an involuntary manner by use of threats, including propaganda or force. It involves a set of various types of forceful actions that violate the free will of an individual to induce a desired response. For example, a bully demanding lunch money from a student or the student gets beaten. These actions may include extortion, blackmail, torture, threats to induce favors, or even sexual assault. In law, coercion is codified as a duress crime. Such actions are used as leverage, to force the victim to act in a way contrary to their own interests. Coercion may involve the actual infliction of physical pain/injury or psychological harm. This is done in order to enhance the credibility of a threat. The threat of further harm may lead to the cooperation or obedience of the person being coerced.” Wikipedia 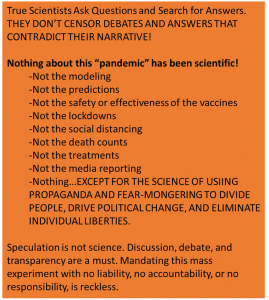 The media has hailed these companies as saviors who rose to meet the needs of the country during a pandemic. They are companies that we are being told to trust. We are told they have our best interests at heart, with a good track record of caring. However, here are some documented facts. These facts should raise serious concerns. It is especially concerning that manufacturers are not liable for any damages or injuries that result from their vaccines.

Johnson & Johnson has been named in numerous lawsuits for toxic and/or dangerous products, including drugs, shampoos, medical equipment, and asbestos-contaminated baby powder.

According to the US Department of Justice, AstraZeneca paid $520 million for off-label drug marketing. It illegally marketed the antipsychotic drug Seroquel for uses not approved as safe and by the FDA.

Reuters reported that AstraZeneca agreed to pay $110 million to settle two lawsuits brought by the state of Texas claiming that it fraudulently marketed the antipsychotic drug Seroquel and Crestor for high cholesterol. These are but two of their settled lawsuits representing a willingness to manipulate, mislead, and coerce the public.

Pfizer is a story unto itself. Here’s a brief glimpse of Pfizer’s track record for safety and ethics. This is a shortlist, by no means inclusive of the company’s entire rap sheet.

Clearly Pfizer has a history of malpractice and coercion. Yet, their COVID vaccine has been met with nothing but positive press from every mainstream media outlet in the country.

Now the coercion is being targeted towards children even as the VAERS Reports grow.

Thousands of doctors and researchers have been speaking out since the beginning of the pandemic. Many have signed The Great Barrington Declaration and offer a much more prudent approach to global health that does not violate individual freedom while also intelligently protecting the most vulnerable.

There are many physicians who are concerned. Among them, Dr. Hooman Noorchashm. He is a retired cardiac surgeon, former U-Penn Medicine professor, and patient advocate. Dr. Noorchashm has been reaching out to the CDC, FDA, and media for months warning “that orchestrating a blanket coronavirus vaccination for every American regardless of prior immunity or presence of risk factors could be a “dangerous medical approach.” Specifically, he has “warned the FDA that prescreening for SARS-CoV-2 viral proteins may reduce the risk of injuries and deaths following vaccination, as the vaccine may trigger an adverse immune response in those who have already been infected with the virus.”

Even the U.S. Centers for Disease Control and Prevention (CDC) admits that it’s rare to get sick again if you’ve already had COVID-19. Despite their own findings, they say those who have recovered from COVID-19 should still get vaccinated.

I was interviewed by the Atlanta Journal-Constitution for an article on my views on this subject. After over two hours of conversation and presentation of science, they used six sentences. Those sentences didn’t present any of the real, and significant concerns. Like so many articles and news reports, the context of the article lacked the background information. Also, it was not well researched, and the intention behind it was at best questionable. It was clearly an attempt to coerce and manipulate readers.

With Vaccine Adverse Events Reporting System (VAERS) reports skyrocketing, every individual must question every procedure. We must maintain the right to choose.

Where there is a risk, there must be a choice – a well-informed and free choice. This is the first point in the Neurenburg Code that came out of World War ll and historically, the violation of this code has turned doctors into criminals.

On this Memorial Day, as we honor the men and women who fought for our individual freedom so that we would have the right to choose.

The 100 Year Lifestyle is committed to providing you with the resources you need to make informed choices so you can live your best and longest life possible. More in-depth articles will be coming your way soon. We are grateful for your trust, the opportunity to be a part of your and your family’s lives, and we are honored to be a part of your journey on your way to a sensational century.