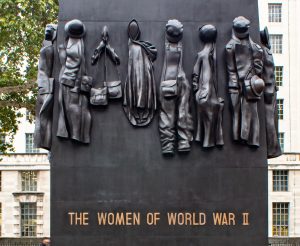 When you’re 102 years old and can make the statement that you’ve enjoyed just about everything you’ve ever done, well, you have lots of special memories. That’s all true for Romay Johnson Davis.

Romay is one of the six surviving members of an all-Black Women’s Army Corps unit. Among the first WACs deployed overseas in 1945, little did she know that all these years later she would be receiving the Congressional Gold Medal awarded to “veterans and those with a direct connection to World War II who have served our country with distinction and continue to lead by example.”

No Cooking, No Cleaning

Not wanting to clean or cook, Romay trained as a driver. When not driving, she ended up assigned to serve in a unique unit comprised of 855 African American women. Stationed in Birmingham, England, they were tasked with clearing the backlog of mail that had accumulated over a 2 year period. That was 18 million pieces of mail. They were given six months but accomplished the monumental task in only three.

Once stateside Davis met her husband, Jerry Davis, and graduated from New York’s Traphagen School of Fashion. The next 30 years were spent in a career in fashion, designing children’s clothing. She also managed to earn a master’s degree in education from NYU and worked in real estate.

Not wanting to be idle, she earned a black belt in Taekwondo in her 70s after moving back with her husband to his home state of Alabama. After his death, when she was 80, she went back to work part-time in a grocery store until age 101. That is what we call living 100:100, 100% for 100 years or more!

If you look at the pictures of Romay today, she looks like she’s still having fun, making memories, and has the intention of keeping on for many years to come! Check out the pictures, and read the rest of this amazing woman’s story, here.