5 Steps to Launch Your Big Idea 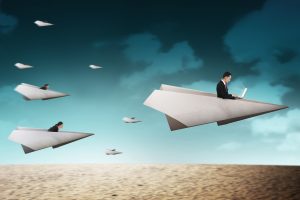 At the age of 26, entrepreneur Peter Diamandis co-founded the International Space University — a $50 million institution. This is the story of his big idea, in his own words, of the tools and techniques he used to create it.

Through SEDS I also met two very close friends, Bob Richards (now CEO of Moon Express, a Google Lunar X PRIZE contender) and Todd Hawley, with whom I would go on to start the International Space University (ISU). In 1982, I ventured with Bob and Todd to Vienna, Austria, to the United Nations Committee on the Peaceful Uses of Outer Space. It was there that we had the chance to meet and befriend Arthur C. Clarke, the visionary author of 2001: A Space Odyssey and the inventor of the geostationary satellite.

What if  YOU could follow in their footsteps to become a part of history?

“Uncle Arthur,” as we called him, shared with us incredible stories of the early days of space… how close and interconnected the early space inventors, engineers, and visionaries of the 1940s and 1950s were with each other. They all knew each other. They all worked closely together, ultimately creating the vision that would become the Apollo program. The idea of such a tight and powerful network of peers enthralled us and got us thinking of creating an institution that would be a magnet for attracting these like-minded and passionate souls from across the globe. In 1986, Bob, Todd, and I set out to create such an organization that we tentatively called the International Space University (ISU) Project.

Now, you have to understand that I was a graduate student at MIT and Harvard at the time studying medicine and aerospace engineering and really had no right to be creating a university, let alone an international space university. But the boldness of the idea was intoxicating. The question was: How to make this happen? What follows is the strategy we executed, one step at a time. And this, I believe, is a great blueprint for big and bold ventures you yourself might want to undertake.

Here are the FIVE crucial steps:

We didn’t claim we were going to start a university. Instead we decided we were going to hold a conference to “study the idea of an ISU.” The former is a bit unbelievable, while the latter is something that people are willing to engage in.

“Influence the influencers” — have leaders champion your ideas.

We recruited as much “super credibility” as possible for this event. What did this look like? First, I got the president of MIT, Paul Gray, to agree to let us hold this ISU Conference at MIT and also to write the welcome letter to the conference. Next, Bob Richards was able to get a delegation from the Canadian Space Agency to agree to the conference. With the Canadians in place, we leveraged that to get a commitment from the European Space Agency, then the Soviets (it was still the U.S.S.R. back then), the Japanese, the Chinese, and then, finally, NASA.

We did our homework. Todd, Bob, and I, along with a crew of volunteers thought through the business plan of an International Space University — the academics plan, the business model, the governance, and the growth plan. We did a great job. We were all in our mid-20s at the time — at the peak of our creative genius, if I could call it that. However, no one would take us seriously because, after all, we were only in our mid-20s. To bolster our credibility, we reached out to the people who had backed us in SEDS and asked them to present our ideas on academics, finances, and governance at the conference. These were folks like space shuttle astronaut Byron Lichtenberg, INTELSAT pioneer Joseph N. Pelton, and former Air Force Secretary John McLucas.

Big and bold ideas are more believable when presented in bite-size, incremental, and digestible chunks. Ultimately, our vision for ISU was an actual university (students, faculty, dorms, and all) in space, in Earth orbit. But we knew that presenting that idea to a roomful of conservative space-agency executives would be dead on arrival.

Instead, what Todd, Bob, and I conceived of was a four-stage growth plan to follow this initial conference. Stage 1 was a test of the basic idea: An initial nine-week summer program to be held at MIT the next summer (1988) for 100 graduate students from a dozen nations studying a multidisciplinary graduate space curriculum. The Second Stage  would involve repeating the summer program in other countries in subsequent years. Stage 3 would involve establishing a “Permanent Campus.” And Stage 4 would involve the creation of an orbital campus. Such a staged concept had the best of both worlds. It has the visionary “heart and soul”-engaging big idea, and the near-term, reasonable, mind-engaging first step.

People love what they helped to create. During the three-day conference designed to study the creation of an International Space University, each of the delegations from space agencies around the world contributed ideas and through this process began to feel true ownership of the idea. It was on the third day that Bob, Todd, and I sprang the true idea. Rather than study the idea, we proposed that we make that day the “founding date” for ISU, and asked for financial commitments to take this from a concept to reality to commit to Stage 1. The participants did not disappoint. Funds from NASA, ESA, and the Canadians materialized, as well as commitments for scholarships and students from the Soviets and Chinese. On April 12, 1987, ISU was born.

So here are your top two takeaways, lessons I’ve consistently used over and over again:

1. The presentation of the idea can be as important as the idea itself. What’s important here is that people love the boldness of the ideas. But they will love them and believe them more when they are presented in a super-credible fashion. You can do this by virtue of the venue you use and the people you use to present your ideas.

Peter’s Law: “The day before something is a breakthrough, it’s just a crazy idea.”

2. Implement your bold idea in doable steps. ISU began in multiple stages. Figure out how to break your big idea into incremental and achievable steps.

Contributed by Peter Diamandis
Reprinted with permission by Nightingale-Conant Corporation.