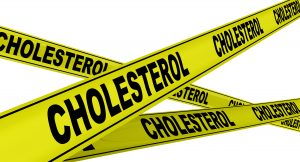 There is a lot of confusion about cholesterol right now. For years, the media has pointed fingers at high cholesterol for being the main cause of heart disease. This has created an era of low fat, low cholesterol diets, which has allowed the processed carbohydrate and sugar industries to boom. If America is decreasing the amount of cholesterol in their diet and distributing cholesterol-lowering statin drugs, why is heart disease still the leading cause of death in the United States?¹ It’s time to clear up the cholesterol confusion!

Cholesterol is essential for life. It makes up almost 60% of your brain, allows your nervous system to communicate, is a component of key hormones in the body, mediates digestion, aides the immune system, and does many other things essential for our bodies to function. Cholesterol is so important, the liver has a built in production line to protect the body if levels get too low. So how did a nutrient that plays so many roles in the body get labeled as “the cause for heart disease?”

Early research from Russian scientists found plaques in the arteries of rabbits that were fed a high cholesterol diet. These plaques had a similar composition to those found in humans that have died from heart attacks.² However, there are many fallacies in this study. First, rabbits are normally omnivores and were not allowed sufficient exercise. This study also never explained the process of how a fat soluble substance like cholesterol, which is able to freely pass though the membranes of any cell, ended up stuck on the walls of an artery.

Having excess sugar in the blood, known as hyperglycemia, creates an environment where glucose can bind to a lipoprotein by a process called gylcation. Just as if you were to spill a sugary drink on the counter, the glycated lipoprotein becomes sticky in your body. Inflammation caused by sugar constricts the blood vessel, which brings the glycated molecule close to the vessel wall. This easily allows it to stick to the walls. The now immobile molecule attracts abnormal cholesterol that has been oxidized -possibly from excess sugar or smoking tobacco- which builds a plaque made mostly of cholesterol. The plaque grows until it restricts the blood flow, leading to major complications such as heart attacks. This plaque would have never occurred without the help of sugar.

The Great Cholesterol Myth² says the single dietary factor that has the strongest correlation with heart disease is sugar. The book cites evidence that over fifty percent of the people who die from heart disease have perfectly normal cholesterol levels. It devotes a whole chapter explaining more in-depth how the sugar metabolism ends with glycation, oxidation, and inflammation mentioned above. Combine that with studies that show the addictiveness of sugar, and we see why heart disease is such a major problem in the United States.

Still not convinced cholesterol isn’t so bad after all? Let’s take a look at patients using statin drugs that effectively lower cholesterol. A study conducted by the ACC showed that “there is ample evidence that lowering cholesterol does not consistently lower Cardiac Heart Disease mortality.³” If we remember the roles of cholesterol in the body mentioned earlier, it makes sense why confusion, amnesia, sexual and muscular dysfunction, and hypersensitivity reactions are just a few of the adverse effects that occur within patients.

Cholesterol is a vital nutrient in the body, and heart disease is not prevented with a pill. It is more likely to be prevented with a lifestyle change which is what living your ideal 100 Year Lifestyle is all about!