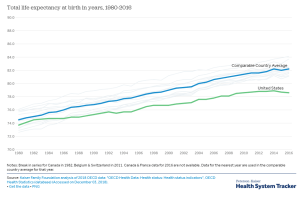 When it comes to health and longevity, it’s valuable to compare countries and systems so that you can make choices for your family on how you want to live.

Health System Tracker 2016 says that Japan has the greatest life expectancy at 84.1 years and the United States has one of the lowest at 78.6 years. Given the data, a clear distinction in health exists between the US and other comparable countries and it is time to start noticing and reverse the trend!

In 1980, the US life expectancy was similar to other comparable countries. So what has happened since then? According to Health System Tracker, contributing factors to life expectancy include “quality of care, access to preventive health services and lifestyle, diet, violence, and accidents.” Prior to 1980, all of these factors were different. And most importantly, there have been radical policy changes that are not working and are contributing to the decline.

The United States now falls extremely short in nearly all aspects of health and wellness. Consider the following:

The 100 Year Lifestyle in JapaneseIs it any wonder why we have low life expectancy, overwhelming rates of chronic disease, and consistently rising rates of childhood neurological diseases such as autism and ADHD? We are injecting high doses of neurotoxins into our children starting on the first day of life. The United States is one of the only countries instantly delivering hepatitis B vaccines to newborns in mom’s who do not even carry the disease. In fact, according to the Children’s Health Defense, 99.9% percent of women test negative for hepatitis B.

“We know that how we live now will impact how we age!”

Let’s look at Japan, who is a comparable country to the United States, yet has the greatest life expectancy:

It is common to think that aging is a dreadful process, however we know that how we live now will impact how we age, and we can choose how we want to get there. This might be hard to believe given that nursing homes and long-term care facilities are now the norm and are popping up on every corner. According to Time Magazine, “47% of men and 58% of women who are retirement age or older will experience a need for long-term care in the future.” In addition, there are 4,000 hospice care agencies which is a “$20 billion business that served 1.4 million Medicare patients in 2015.”

So how do we avoid many of the traditional maladies of growing old? Live a quality life starting today and take care of your body, mind and by keeping your brain, spine and nervous system functioning at full capacity. Begin to question the outside-in approaches such as vaccines and drugs embrace a more inside out health philosophy. More people in Japan are flourishing with many of the 100 Year Lifestyle principles as a part of their culture.

It’s time for a new approach for you and your family. Find a provider near you.

*The National Vaccine Information Center and The Highwire with Del Bigtree are great resources for those concerned with the important truths related to vaccine policy and injury.